8 Things You Didn’t Know About Fish

Fish are one of the oldest animal families on Earth, and although there are probably hundreds of species we still have yet to discover, the facts we do know about them are quite amazing.

It’s been hard to recognize the intelligence of creatures who seem quite different than us, but the more we learn about fish the more we realize how smart they really are. Fish have shown “Machiavellian intelligence,” the ability to manipulate the behavior of others via deception, or by reconciling with them. For example, the batfish plays dead when danger is near by floating motionless on its side when scared, making it look like a dead leaf floating on the surface of the water. Cleaner fish, who eat away the dead skin and parasites on other fish, utilize a reconciliation process when they accidentally bite their food carriers. It’s said that they often give a back rub to their clients to make up for this mistake. There is also compelling evidence that ﬁsh are capable of self-recognition using chemical cues, which has been seen as a sign of intelligence. 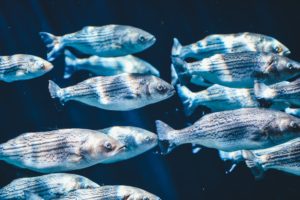 There is absolutely no doubt that ﬁsh have all the hardware associated with pain perception. If you look at the pain receptors in ﬁsh you can see a remarkable resemblance to those in humans. One of the more interesting forms of evidence that ﬁsh respond to pain in a cognitive sense is the fact that pain appears to distract ﬁsh and prevents them from carrying out other tasks or paying attention to external stimuli. For example, in a study where fish were injected with acetic acid, they lost the fear of novel objects presumably because the cognitive experience of pain is dominant over other processes. Similarly, the anti-predator responses of rainbow trout are disrupted and dominant ﬁsh become less aggressive if they are suffering pain.

3) Many are quite social

Most ﬁsh live in social groups for most of their lives, and living in complex social groups requires a lot of cognitive capacities to keep track of social relationships. One of the most common group activities of fish is schooling, where many swim in a coordinated pattern for the purposes of foraging, reproduction, and defense from predators. Fish tend to cooperate with one another when they are doing dangerous acts like checking out a predator. If a fish doesn’t make a good partner while inspecting this predator, the other fish will take note and will remember this for next time. Another example that displays social abilities is when siamese ﬁghting ﬁsh use what they call “eavesdropping” by watching third parties interact with one another so they are able to judge their position in a hierarchy. 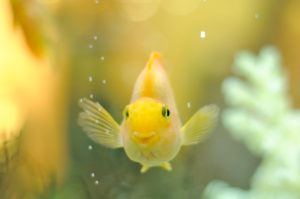 Fish use a variety of sounds to communicate with one another. They moan, grunt, croak, chirp, hiss, whistle, creak, pop, shriek, and wail. Some also rattle their bones and grind their teeth. These sounds are used for a variety of things like attracting mates, scaring off threatening fish and predators, and orientating themselves.

5) They have good memories

The myth that fish have short memories has been debunked study after study. Fish can learn quickly and can actually keep memories long-term. For example, it took only five trial runs in a research study for rainbow fish to learn how to swim out of a net via a single hole, and that they remembered the escape route after not seeing the net for nearly a year. And like mentioned before, fish will remember who doesn’t make a good partner while checking out a predator and will avoid them or even punish them next time around. 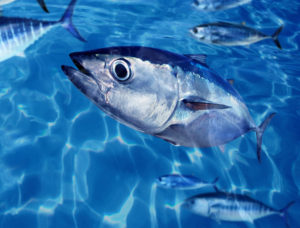 It’s not just primates and birds who use tools; we have seen this behavior by many fish species. We’ve seen certain types of wrasse fish use rocks to crush sea urchins so they can eat their soft insides, and we’ve also seen cichlids and catfish glue their eggs to leaves and small rocks, which they carry around when their nests are disrupted. At least 9,000 species of ﬁsh build a nest of some sort for laying eggs or for shelter, and the nests vary tremendously in the materials used and their shape and function.

Researchers have discovered that even fish like to have fun. They’ve seen fish playing with thermometers at the bottom of fish tanks and seen octopus repeatedly pulling toy balls underwater and letting them go to watch them quickly float to the top. And just look at how adorable this fish is playing fetch!

8) They want to live

There is no doubt that these animals want to live, and we shouldn’t be the ones to rob them of life. Thankfully, there are more and more alternatives to eating fish on supermarket shelves every day. Next time your shopping, look for Gardein’s Fishless Filets. And you can even try “fish-like” recipes using watermelon, chickpeas, and tofu.

How to Eat Vegan at the Movies
Vegan Food at the 99 Cent Store
How to Order Vegan at Pizza Hut
8 Things You Didn't Know About Fish
7 Need-To-Know Tips For New Vegans
Are Products that “May Contain Traces of Milk and Egg” Vegan?