It’s pumpkin season and I wanted to make a take on a pumpkin pie, without all the work. These vegan pumpkin pie parfaits are the perfect treat to get your pumpkin fix, and they are super delicious and easy to make.

1 cup vegan granola (almost any kind will work, but I suggest something with vanilla or cinnamon)

For the pumpkin “butter”:

For the candied pecans: 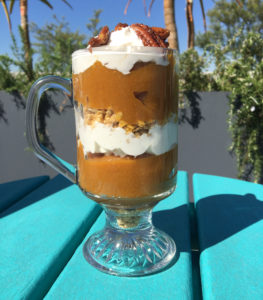 First prepare the pumpkin “butter” because it will need about 2 hours to cool. Combine all of the pumpkin “butter” ingredients into a pan and cook on medium heat for about 10-15 min. You want to get it to a boil, although the mixture is thick so you should see only a few bubbles pop up to the surface from the very bottom. Reduce to a simmer and stir occasionally. The longer you cook the mixture the thicker it will get and the richer the flavors will be.

Set the pan aside to start cooling the “butter” and once it’s at about room temperature you can place the mix into freezer bags and pop them in the fridge.

To make the candied pecans, place the pecans in a pan on medium heat and toast for a couple minutes, making sure not to burn them. (Nuts aren’t cheap!) Reduce the heat and add in the coconut oil, maple syrup, sugar, cinnamon, and salt and toss to fully coat the pecans. Cook for another minute or so, again making sure not to burn them. Then transfer them to a plate and let them cool.

Once everything is cooled it’s time to assemble! Put a layer of granola (acting as the “crust”) on the bottom of a clear mug or wine glass. Then cut a small corner off of the freezer bag with the pumpkin “butter” and squeeze an inch or two into your glass. Then pile on a layer of vegan whipped cream and top that with more granola. Add another layer of pumpkin “butter” and vegan whipped cream and then add pieces of your candied pecans on top. Enjoy!

How to Eat Vegan at the Movies
Vegan Food at the 99 Cent Store
How to Order Vegan at Pizza Hut
Are Products that “May Contain Traces of Milk and Egg” Vegan?
Coconut Curried Sweet Potato and Chickpea Stew
7 Need-To-Know Tips For New Vegans