Why We Love And Protect Pigs

Pigs are adorable, intelligent, curious, playful and loving, yet they are one of the most abused species on the planet. During National Farm Animal Awareness Week, we want to share with you some of the reasons why we leave them off of our plates and defend them from the cruel meat industry.

Pigs are social animals and they enjoy snuggling up with one another and they even dream while they sleep. They are big “talkers” and have several ways to communicate through a range of different oinks, grunts and squeals, all which have distinct meanings. Newborn piglets learn to run to their mothers’ voices and to recognize their own names. And mother pigs “sing” to their young while nursing. 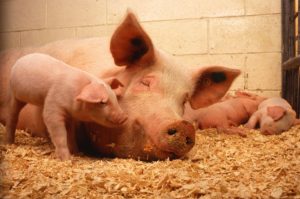 Not that intelligence should be a factor in why we treat some beings better than others, but pigs are some of the most intelligent animals around, measuring up to the smarts of dolphins, elephants, and primates. In a study conducted at the University of Cambridge, it was found that pigs are capable of recognizing themselves in a mirror, and can quickly learn objects that were shown in the reflections. They found that pigs are highly sensitive animals who become aware of their own existence. Moreover, their skills help them to gain knowledge that can be used later to solve complex problems. There is no doubt that they are very aware of the suffering and mistreatment they face on factory farms, and because they are so smart develop abnormal behaviors such as tail-biting and biting the metals bars of their small crates. 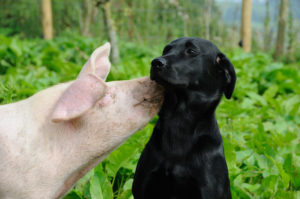 Another reason to leave pigs off of your plates is the health risks. Pork products clog arteries and contain high amounts of saturated fat that can lead to diseases like heart disease and diabetes. The World Health Organization has even classified processed meat like hot dogs, ham, bacon, sausage, and some deli meats as carcinogens. In order to keep pigs alive in conditions that would otherwise kill them, the industry must provide pigs with high amounts of antibiotics that we depend on to treat human illnesses. This overuse of antibiotics has led to the development of antibiotic-resistant bacterial strains, so by eating pork products, it may make the drugs that your doctor prescribes completely ineffective. 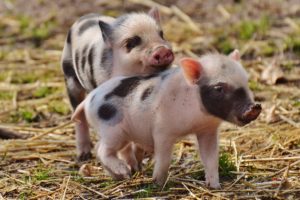 Whatever the reason is, more and more people are choosing alternatives to pork. Next time you shop look for tasty plant-based products like Gardein’s Sweet and Sour Porkless Bites, Upton’s Naturals’ Bar-B-Que Jackfruit, or Field Roast’s wide variety of vegan sausages. The animals (and your body) will thank you!

Are Products that “May Contain Traces of Milk and Egg” Vegan?
Vegan Food at the 99 Cent Store
7 Need-To-Know Tips For New Vegans
How to Eat Vegan at the Movies
How to Order Vegan at Pizza Hut
7 Fast Food Places to Eat at Instead of McDonald's